Also known as "Lord, Blow the Moon Out, Please."
No comments:

No song has been more popular across the years for every kind of kid at summer camp than "Titanic." It's a a fun, lively song about a tragedy, so maybe that combination is a winner.  In any event, I arranged this for a virtual marching band to emphasize the fun and lively aspect.

"The Lifeboat Crew" is a song for which I have found very little information, just a mention in a US Navy newsletter nearly 100 years ago. Please take a listen and let me know if you have ever heard it before:

I've put together instrument versions of a few camp songs, using them as the basis for videos with onscreen lyrics. You can sing along karaoke style - feel free to record yourself and upload the results on your favorite social media sites.  Or maybe you just want to learn a new song or refresh your memories of a melody or lyric. Of course, my version may not be the same as yours, so please share any differences in the comments.  I'm always interested in variations of these great singalong songs.

Here's the first one, a sweet song about romance on the water:

A while back I wrote a couple of short posts about a fun song I learned at camp that was based on a poem by A. A. Milne (Winnie the Pooh's creator).  In my other music blog I have posted a new interview I did with the Chad Mitchell Trio's namesake, who set the poem to music.  Please read it HERE.

This is the original recording:


I don't know if it is or was sung at other camps, schools or other group settings.  If you know the song, please share your experience in the comments.
No comments:

"The Ash Grove" and its Welsh origins


Many camps and youth groups sing "The Ash Grove," a lovely song about the memories evoked by a walk in the woods.  The melody is the same one used in the original version of the song, which appeared in Wales in the early 19th Century.  The title, "Llwyn Onn," is Welsh for "ash grove."

Where it differs is the lyrics, which detail a tale of young lovers who die tragically.  Here is the English translation:

In the grand Ash-grove Palace, there lived a bold chieftain
And he was a squire and ruler of the land.
He had a fair daughter with many to court her
But none would she take for to give up her hand
Save her sweetheart, so handsome, so poor but of pure heart.
Her father unwilling and threatening the worst
Did shoot at the lad, but the bowstring was twisted
So crooked the arrow struck deep in her breast.

Too late to recall the dart back to the bowstring,
The poor girl lay dying, so mournful and sad.
In anger, the squire, his sword at the ready,
Did thrust at the heart of the unflinching lad.
Oh wealth is a master, so old and so peevish,
And from its cruel clutches she desperately strove.
"'Tis better to die by my own lover's side
Than to live in sorrow in the Palace Ash-grove."

Let's listen to both versions, each sung by a popular baritone in decades past. First, the modern version:

And here is the Welsh version:

Whatever the lyrics or language, the song retains its haunting beauty.
No comments:

They Go Wild (mosquitoes or the opposite sex?)

"They Go Wild" as sung at camp refers to the bothersome insects in the woods.  But in the original song, a big hit in 1917 in the early days of recorded music, "they" refers to members of the opposite sex. 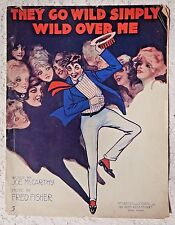 Here is the camp version:

Ev’ry morning on my pillowcase
A daddy longlegs stares me in the face
In my bathing suit and shoes
They assemble for a snooze
They go wild, simply wild, over me

And here are a couple of verses from the original:

They go wild, simply wild, over me
They go mad, just as foolish as can be
I meet so many kind I have to leave a few behind
They love me, they kiss me, I guess they must be blind

Every night how they fight over me
They all fall for my personality
I'm not good looking, it is true, but it's the little things I do
That make them wild, simply wild, over me

"They Go Wild" was composed by Fred Fisher with lyrics by Joe McCarthy.  Here is Billy Murray's version, the one that popularized the song:

The song has been recorded in many genres over the past century.  I haven't found the camp version anywhere, so I will leave you with this wester swing version from the 1930s, one of my favorites: